Travelling safely and comfortably from the north of Amsterdam right through the heart of the city to Zuid station in only 16 minutes. An impossible feat to accomplish by car, bicycle or the current public transport system, but with the North-South Line it is expected to be an everyday reality for 185,000 commuters. Despite setbacks in the construction process and frequent negative reports in the media, the first passengers will likely be able to start using the new metro line 52 by 2017. The successful test run through part of the tunnelled section at the beginning of November was encouraging in this respect. 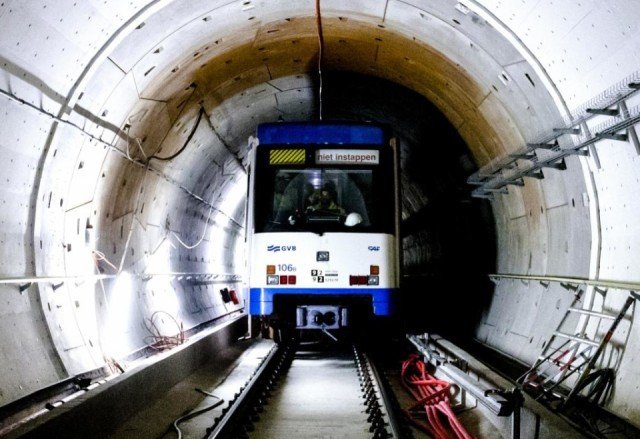 Good accessibility and a smooth flow of traffic in the city are essential to Amsterdam’s economic development. But there is no room for more trams and busses in the city centre. The only alternative to the often overcrowded trams and busses is to be found below ground. Together with the existing metro network, the North-South Line will need to ensure that Amsterdam becomes and remains more easily accessible.

The North-South Line has a total length of 9.7 kilometres and starts above ground, at the new Noord station near the A10. The line then runs under the river IJ and Central Station, continuing its way via the Damrak, Dam square, the Rokin, Vijzelstraat, the Vijzelgracht, Ferdinand Bolstraat and Scheldestraat through a 3.8 kilometre-long bored tunnel. From Europaplein, the tunnel is constructed by cut and cover method. The route emerges above ground in the central reservation of the southern section of the A10 ring road in between the new Europaplein station and Zuid station, where the metro line will connect with the existing network.

Safety is an important aspect of the construction of the North-South Line and will be a top priority once it is operational in 2017. The underground tunnels are constructed with twelve escape routes to allow passengers to escape into the adjacent tunnel or onto the street above the tunnel in case of an emergency. The escape passages to the street will be pressurised, like emergency stair wells in buildings. Any smoke that may form during a calamity is thus prevented from filtering into the passages through the doorways.

Four of the seven underground stations along the North-South Line have been designed by Benthem Crouwel Architects. This name is not unknown to Bolidt. The renowned architectural practice was also responsible for the design of the Ziggo Dome concert venue in Amsterdam, where Bolidt installed the flooring. Both companies crossed paths again when they both worked on the North-South Line. Bolidt fitted the technical spaces of all seven stations with the durable Bolidtop® 200 RF (industrial) flooring system.

Request a brochure
Ask a question

Get inspired, read about the latest innovations and keep your creativity up to date.

Send us a message